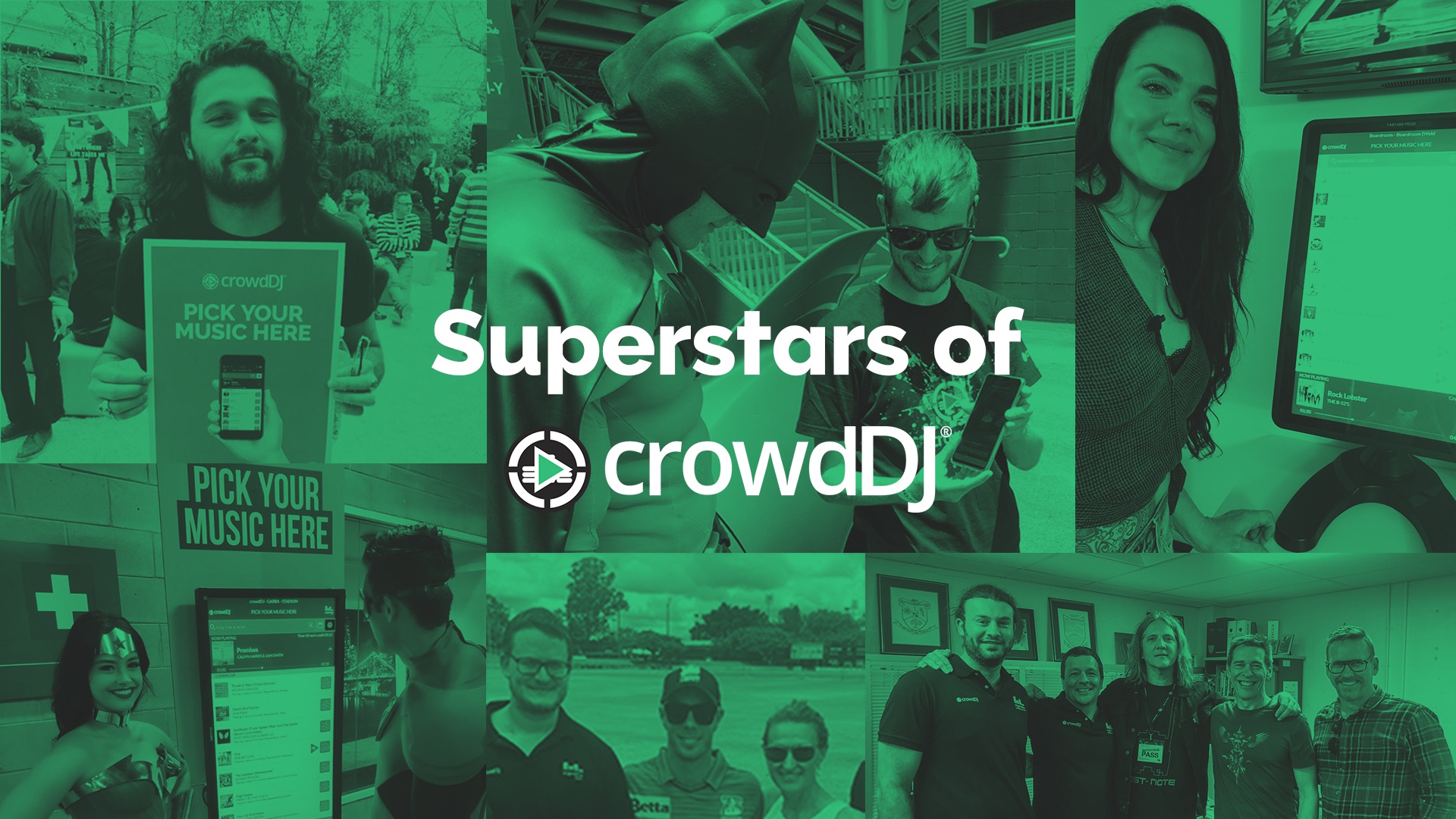 crowdDJ® has seen some superstars since its launch in 2016. Over 30 million songs have been picked in the last few years by gym-goers, pub crawlers, ten-pin bowlers and sports fans. To celebrate its success, here’s a round-up of some famous faces who’ve used crowdDJ®. As a music tech company that calls Brisbane home, Australian musicians have a special place in our hearts!

Jeremy Marou, one half of the Rockhampton-born Busby Marou duo gave us the pleasure of selecting a crowdDJ track at the Gabba while we provided music for the Brisbane Heat’s BBL home games. We also had song selections from Heat’s Chris Lynn, Ben Cutting and Matt Renshaw – who requested some Pitbull from our crowdDJ Kombi Kiosk. Rounding out the famous faces at the BBL were The Green Lantern, Wonder Woman and Batman.

Sticking with the sports theme, netball superstar Romelda Aiken shot songs at us during the Queensland Firebirds’ home games while Jake Matthews – Aussie mixed martial artist competing in the UFC – took his gloves off to pick some fighting tracks at Highpoint Hotel, VIC.

Indigenous Australian rapper, dancer, artist and actor Danzal Baker, who you’d know by his stage name Baker Boy, was spotted with our staff and David Le’aupepe, frontman from Sydney indie-rock group Gang Of Youths spoilt us with some smacking selections at Australia House at SXSW.

2020 marks the 20th anniversary of ‘My Happiness’ and coincidentally Nightlife HQ was spoilt with a visit from Powderfinger’s own Ian Haug last year. Vanessa Amorosi and her crazy wonderful vocal range visited us also, taking a trip down memory lane to play ‘Absolutely Everybody’ in our boardroom. Speaking of wonderful female voices, we took the opportunity to get a photo with singer, songwriter, TV and radio presenter Ricki-Lee while on board Pacific Dawn, one of the beautiful ships in the P&O fleet.

With no shortage of #superstarcrowdDJ’s around, The Crazy Bull aka Chef Miguel Maestre has been known to pair a crowdDJ tune or two with a good dish at Brisbane’s Good Food and Wine Show and Biggest Loser Australia trainer Shannan Ponton has also been spotted smashing out the hits with Anytime Fitness and crowdDJ.

While we’re talking about hits, there was also the time when Kelly Rowland shared her ‘Gettin’ Jiggy Wit It’ karaoke moment at The Star Gold Coast with pal tennis star Serena Williams.

Amy and Emma from Brisbane pop band Sheppard also got crowdDJing at the High Rotation exhibition at Museum of Brisbane. Their music is featured on crowdDJ Kiosks and the big screen as part of a celebration of Brisbane’s music scene over the last 30 years.

Despite all of this, the real crowdDJ superstars aren’t the rock stars, celebrities or sports legends. It’s the people at every single pub, club, restaurant or gym (superpowers or not) who downloaded the app or used the kiosk to choose their favourite songs and keep the tunes playing all over Australia and the world.