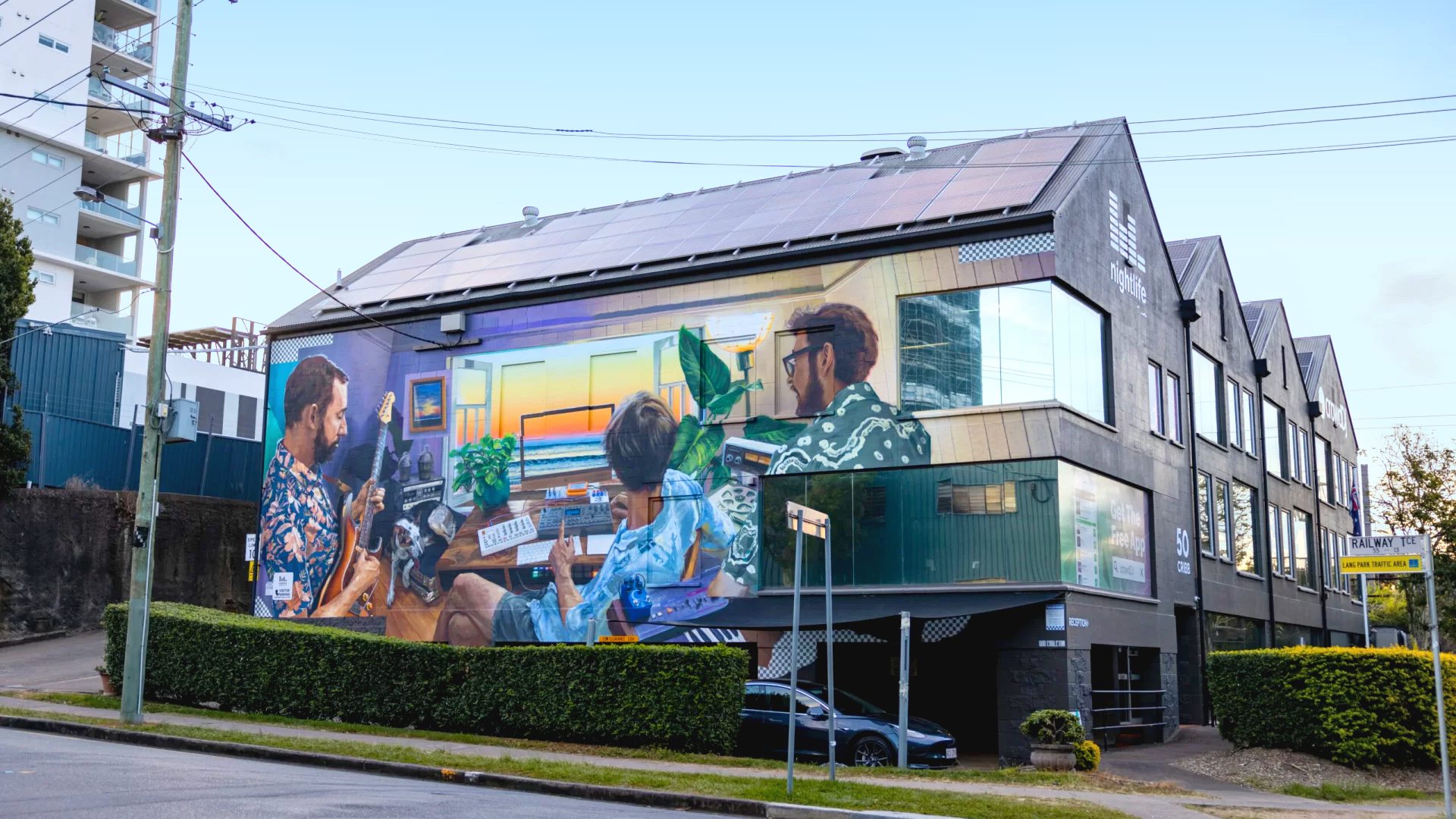 Nightlife HQ Celebrates Art And Music In A BIG Way

At Nightlife Music, we are driven to create opportunities for connection and creativity.

As an Australian, family-owned, creative-tech business, our owners believe that connections with staff, artists, and local community are just as important as the world-leading technology solutions for music and visuals we create.

Leanne de Souza, co-owner of Nightlife Music, has been widely regarded for her passion and leadership across the Brisbane music and arts scenes since the early 1990s.

Naturally, when an opportunity arose for the company to partner with the 2022 Brisbane Street Art Festival (BSAF), it was an ‘all or nothing’ commitment for both the building and business owners.

“Brisbane artists and creative leaders embrace collaboration in a way that adds vibrancy to our city and for the people who choose to live and work here – the lands of the Jagera Yagera and Turrubul peoples,” says Leanne de Souza, Co-owner & Executive Director of Nightlife Music.

“It was a wonderful experience to embrace a partnership with Lincoln and his team at Vast Yonder as we emerge stronger and more resilient than ever from the pandemic.”

Lincoln Savage and his team at Vast Yonder are the creators of BSAF, having organised and overseen the festival’s murals and installations since its inception in 2016.

For over a decade, Gus has produced powerful pieces that reflect on relationships, the sense of self and the environment we live in. His most recent work is no exception.

These two producers love to create an immersive and expansive soundscape with their music. They use a range of elements, including hypnotic lo-fi beats, funk and jazz instrumentals, even playful samples from nature and pop culture!

Why Gus Chose Desmond Cheese As The Subject For Vision

When he met the duo many years ago, Gus quickly discovered the three of them had a shared interest in art (particularly graffiti), hip hop, and jazz.

Since then, Gus says he feels their spontaneous connection and friendship has greatly influenced not only his creative practice, but also his way of thinking.

“Desmond Cheese has always had a clear vision for their music, and has kept family, friendship, inclusivity and collaboration a priority, while also relying heavily on the natural world for inspiration. As a result, they have produced music that I believe best represents Brisbane.”

And what better place to showcase that than at Nightlife HQ!

What does Vision depict?

The large-scale mural shows band members Andrew and Bob, along with their furry friend Ava and keyboardist Rohan, in the studio working on new tracks.

If you look closely, you will see their computer screen blends and extends into a wider and expansive view of the ocean.

This is a brilliant detail, which for Gus and those of us at Nightlife HQ, is a great commentary on the direct influence the environment has on Desmond Cheese’s music!

What would Gus like people to take away from Vision?

“I think we often get caught up in the hustle and bustle of modern-day life and so it’s easy to lose sight of what’s essential, which is spending time with our loved ones and producing the most genuine work we can,” says Gus.

“This mural serves as a reminder to keep a clear head, enjoy those around you, and let your creativity come naturally.”

Nightlife Music is grateful for our involvement in the 2022 Brisbane Street Art Festival and the work done by the talented Gus Eagleton.

We have been headquartered on the corner of Cribb St and Railway Terrace in Milton, Brisbane since the early 1990s. In that time, countless music and video tracks have been remastered, curated and scheduled across the world, with many more on the horizon.

Next time you’re in the neighbourhood, be sure to check this masterpiece out, and don’t forget you can listen to Desmond Cheese the next time you’re out and about using crowdDJ®!

As Neighbours prepares for its series finale after 37 years and almost 9000 episodes, Nightlife Music is making sure this iconic, all-Australian soap opera…

Nightlife would like to acknowledge and pay respect to the Elders past and present, to those who have passed before us and to the…