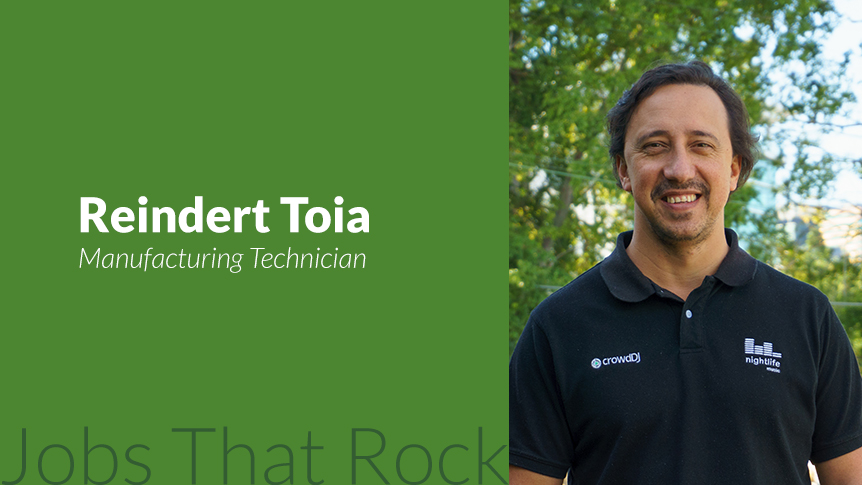 A king of performing since 6 years old, Reindert Toia is a man of many talents, and star of many roles here at Nightlife. We sat down with him to get the scoop on his work and acting future.

Pre-Nightlife my career was a whole heap of manufacturing in a hot, sweaty environment where music had been banned. When the boss banned music I knew I had to move on.

You’ve been at Nightlife for three years now. How has your role evolved over your time at Nightlife?

Initially I started in manufacturing building systems. I then moved into warehouse setting up systems for sale and now I work between both areas. The manufacturing side has changed significantly. Building a system is less labour intensive now but we output a much greater number of systems. Add to that 10” and 22” tablets, turntablets and routers and it’s clear manufacturing is a much more dynamic area than before.

What’s your favourite or proudest moment at Nightlife so far?

My favourite moment is happening as we speak. We’re currently working on ways to build our systems more efficiently. I really nerd out on that kind of thing. It’s my favourite thing and also my secret shame (oops, I suppose it’s not so secret any more).

What are the most enjoyable things about your role?

Definitely the most enjoyable part of my job is the people I work with. We have a great team both in our department and within the company in general. That said I do really enjoy building computers.

You’re currently studying a Bachelor of Science majoring in Meteorology, how is that coming along? Can you pick a favourite cloud formation or is that like choosing a favourite child?

My degree is in its infancy. I’m studying online and have only just completed my 3rd subject. It is going well and I feel less dumb now than when I started. Haha. My favourite subject funnily enough has been Weather & Climate which is a basic meteorology and climatology subject. And again I have been nerding out a little, I may have more than once taken photos of clouds this semester as they matched up perfectly with something I was studying at the time.

You’re also a performer! Tell us a little about that.

I’ve been dancing since I was 6. My first professional gig was at Expo 88; yes I’m that old. It’s something I’ve always loved and I was lucky enough to tour with it. My favourite performance was in the Duke Theatre on 42nd Street, New York with my tap idols in the audience and one of them in the show with me.

What has been your favourite acting gig?

I’ve been lucky enough to play 2 of my dream roles. The King in ‘The King and I’ and Gene Kelly’s role in ‘Singin’ in the Rain’. So much fun.

What are your goals for the future?

My main current goal is to finish my degree but in the meantime I just want to enjoy work and play equally. Finding that elusive work/life balance is the ultimate for me.

Interested in working for us? Keep an eye on our Careers page and follow us on LinkedIn to keep up to date with available roles.

Advice from an intern: what I learned interning that I didn’t at uni

I’m Georgina and I’m studying a double degree in Biomedical Science and Business, majoring in Marketing. I bartend in a music venue, as well…

Happy people make for a happy workplace and greater productivity. That’s a fact, according to the latest research where lab tests from the University…

How to attract and keep a millennial workforce

Music whiz Renee Gardner has been programming songs at Nightlife Music for 12 years, just one of the 68 millennials (or Gen Y) this…