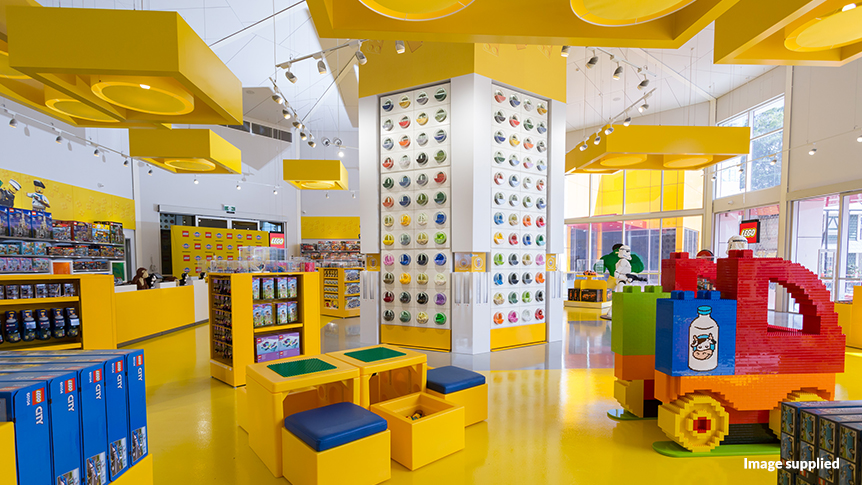 Australia’s first official LEGO® Store opened over the weekend and it was bricktacular!

The flagship LEGO Store is part of a stand-alone precinct at Dreamworld’s front entry; with access from within and external to the park. We were there for the opening and proud to provide the family friendly soundtrack to this exciting new retail space.

Nightlife’s General Manager of Sales & Marketing, Phil Brown commented:
“The work we’re doing with Dreamworld and their LEGO store compliments what we’re doing across the park; in terms of designing a mix of content that helps drive a great experience in each area”.

After a seven-month build, the LEGO store is the largest retail outlet at Dreamworld, covering an area of 350 square metres. “The design is sleek and impressive, just take a look at those giant LEGO block ceiling lights! This is branding at its best”.

The store offers one of the largest ranges of LEGO in Australia with the equivalent of two Olympic swimming pools of LEGO to choose from. Dreamworld representatives told us that if you made a tower by placing end-to-end all the boxed LEGO sets available for sale in the Dreamworld store, it would be 2.58 kilometres high and more than 20 times taller than Dreamworld’s Giant Drop.

Anzac Day in your venue

Anzac Day goes beyond the anniversary of the landing on Gallipoli in 1915. It’s the day on which we remember all Australians who served…