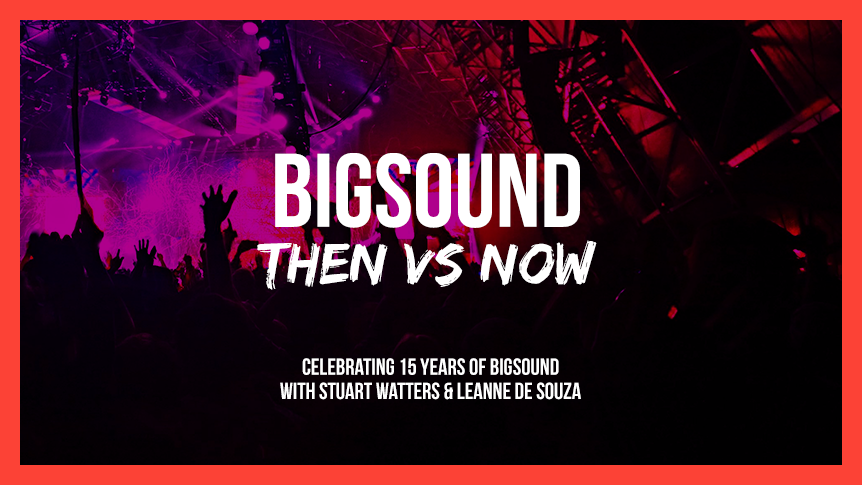 BIGSOUND: Then VS Now

BIGSOUND by Q Music is celebrating 15 years of breakthrough music and creative exchange this September. We’re proud to be partnering with the BIGSOUND team. Helping continue the legacy of innovation that has been so richly on offer at what is now a mainstay on the Music Industry calendar.

On the eve of BIGSOUND’s 15th year, we thought we’d take a look at how much has changed. For an insiders take on BIGSOUND throughout the years, who better to go to than our very own Stuart Watters, Director of Licensing & Business Affairs at Nightlife Music and Q Music Board Member. Stu programmed and managed the very first BIGSOUND in 2002, so has more than a few tales to tell. Also privileged to be working with renowned artist manager and consultant Leanne de Souza, heading up Nightlife’s BIGSOUND project team. Leanne is also a previous programmer of BIGSOUND and long-time contributor.

What was the original motivation behind BIGSOUND?

Watters: We wanted to provide a local platform for Queensland based music industry reps and artists to share their knowledge. As well as expertise, ideas and craft in a non-formal environment. At the time, the only real industry event was based in Sydney and was run by private interests. Q Music responded by creating an event that was meaningful, relevant, productive and accessible.

de Souza: It was a logical next step for the music community here to ‘make something happen’. We could network more effectively and expose our local artists, bands and songwriters to the influential folks from down south. Without the heavy financial costs of touring.

Do you think the philosophy of BIGSOUND has changed over the years?

Watters: No, the original premise remains and is actually stronger than ever… BIGSOUND is still very much about showcasing new talent. In the early days, there were approximately 8 showcasing artists…there are now 150. There are infinitely more industry people coming into town and it has become a tourist event – people fly in from all over the country just to say they were here when ‘that band’ played.

de Souza: I agree, the very core of BIGSOUND hasn’t changed. I would say the showcasing element has changed…our local artists now compete and hold their own with the next crop of emerging artists from across the country, and even the world, in a multitude of genres.

What about the technology? You must have witnessed incredible changes there.

Watters: Absolutely! You have to understand BIGSOUND launched right at the start of the transition to Digital. There were no smart phones, Napster and Kazaa were front and centre of the conversation, music revenues were heading south rapidly, new streams of revenue like ‘ringtones’ were a thing and there was no Spotify – even iTunes didn’t exist. We didn’t have MySpace and there was no such thing as Facebook or YouTube.

de Souza: The technology change is mind-blowing, and BIGSOUND has often been a test bed for innovation. I’m particularly interested to see the use of crowdDJ® at Brightside, where people are going to be able to pick the songs that play between bands. Giving the audience this sort of control over the soundtrack means the music that plays will have much more relevance and be more personalised.

Watters: Yeah, it’s great that we can bring this sort of innovation to the table. Apart from giving the audience choice, the Brightside activation is also a game changer for rights owners. We are creating a new precedent around the use of a commercially licensed platform in a live music setting, triggering a rights flow that has so far been largely swept under the carpet by the industry.

So Stu, take us back. If you can remember back that far… what was the first BIGSOUND like?

Watters: It was brilliant and really exciting. People from Melbourne and Sydney wanted to come to Brisbane to get away from the cold. It was an exciting time in an industry that was in enormous flux and change without certainty, and everyone had an opinion on its future. I’m pretty sure the band Full Fathom Five were the head liner that year along with Glockenspiel, Everyman and His Llama, Pty Ltd, Briztronix, Souvenir City and DJ Specimen…it was a very Brisbane-centric live electronic sound.

Leanne, do you have a particularly fond memory from the days of BIGSOUND past?

de Souza: Oh so many! In the early years there was a core principle, where all the venues had to be within walking distance of each other so that you could see every single showcase. It was like a giant pedestrian roundabout of live music venues…it was awesome!

I do remember the year The Middle East played at Family Nightclub (I LOVED that venue being used for live music). I watched the band members parked in the corner of a coffee shop for two days straight taking meetings with every agent, manager, and label at the conference who wanted to work with them. These gorgeous young people from Townsville really being discovered by the world was magical.

What other artists have been discovered at BIGSOUND?

Watters:  BIGSOUND has launched artists like Temper Trap, Courtney Barnett and Flume to the world stage. There are plenty more…The Basics, The Mercy Beat, Rufus, Kimbra, The Preatures, Cloud Control, Citizen Kay, The Peep Tempel, Gang of Youths, Abbe May…I could go on!

Anyone we should be looking out for this year?

Watters: I’ve got a whole Spotify playlist dedicated to this but I’ll call out Fountaineer, Harts, Vera Blue, Cleopold and Heads of Charm.