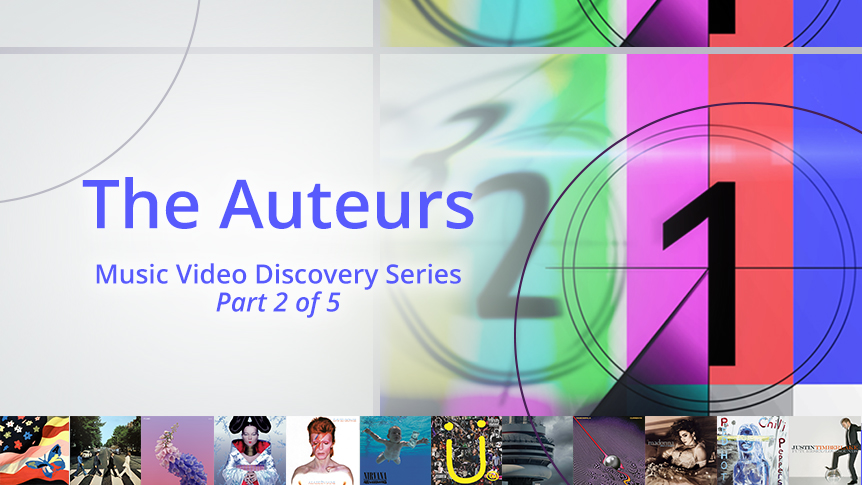 This list is comprised of work by visionary directors, who have applied their signature styles and definitive creative choices to make for visually spectacular and iconic music videos. With many directors in this category having since made their name in feature film; in the realm of music videos, no bounds to narrative. Video film clips can be pure aesthetic, with the only boundary imagination, it allows directors to really push artistic boundaries while creating a few minutes of truly exciting and iconic imagery.

Daft Punk Around The World, 1997
Director: Michel Gondry (Eternal Sunshine of the Spotless Mind)
According to Gondry, firstly, the robots represent the singing voice; secondly, athletes symbolize the ascending/descending bass guitar; the femininity of the disco girls represents the high-pitched keyboard; the “itchy” skeletons dance to the guitar line; and finally, the mummies representing the drum machine. He stated, “I was sick to see choreography being mistreated in videos such as filler with fast cutting and fast editing, really shallow. I don’t think choreography should be shot in close-ups.”

Nine Inch Nails Closer, 1994
Director: Mark Romanek (One Hour Photo)
This video used out of date film stock. Romanek: “They had stopped making it three years before and we found some of it. Normally you don’t want to use that kind of stock because the colors will be off. It does have a shelf life but in this case we didn’t care, the more fucked up it was the happier we were.”

Jean-Michel Jarre Zoolook, 1984
Directors: Jean-Pierre Jeunet & Marc Caro (City Of Lost Children)
Best known for their collaborative work on the feature films Delicatessen and City of Lost Children, “Jean-Michel Jarre’s Zoolook contains many visual hallmarks of this celebrated creative team; with its stop-motion animation, along with live-action, and all sorts of strange images – the video itself is really a delight to watch as well as one of the highlights of their work.”

Aerosmith Janie’s Got A Gun, 1994
Director: David Fincher (Fight Club)
In addition to MTV’s ban due to the song’s dark theme of child abuse, gritty and gruesome realistic scenes, this video became more explicit by references to incest. “I got really angry that nobody was paying homage to those who were abused by Mom and Dad.” declared Steven Tyler. The song’s video won the band an MTV Video Music Award for Best Rock Video as well as MTV Viewer’s Choice Award in 1990, despite the heavy subject matter. As a result, these awards marked the band’s first VMA wins.

Bob Dylan Subterranean Homesick Blues, 1965
Director: D.A. Pennebaker (Ziggy Stardust and the Spiders from Mars)
The film clip that spawned numerous imitations, also a precursor to what we now know as the music video. Besides its obvious influence on music, the song was used in one of the first “modern” promotional clips. Additionally, he original clip was the opening segment of Don’t Look Back, a doco also by D. A. Pennebaker on his 1965 tour of England. Thought up by Dylan, it features him holding up cue cards written by Donovan, Allen Ginsberg, Bob Neuwirth, and Dylan himself displaying selected words, phrases and in-jokes from the lyrics.